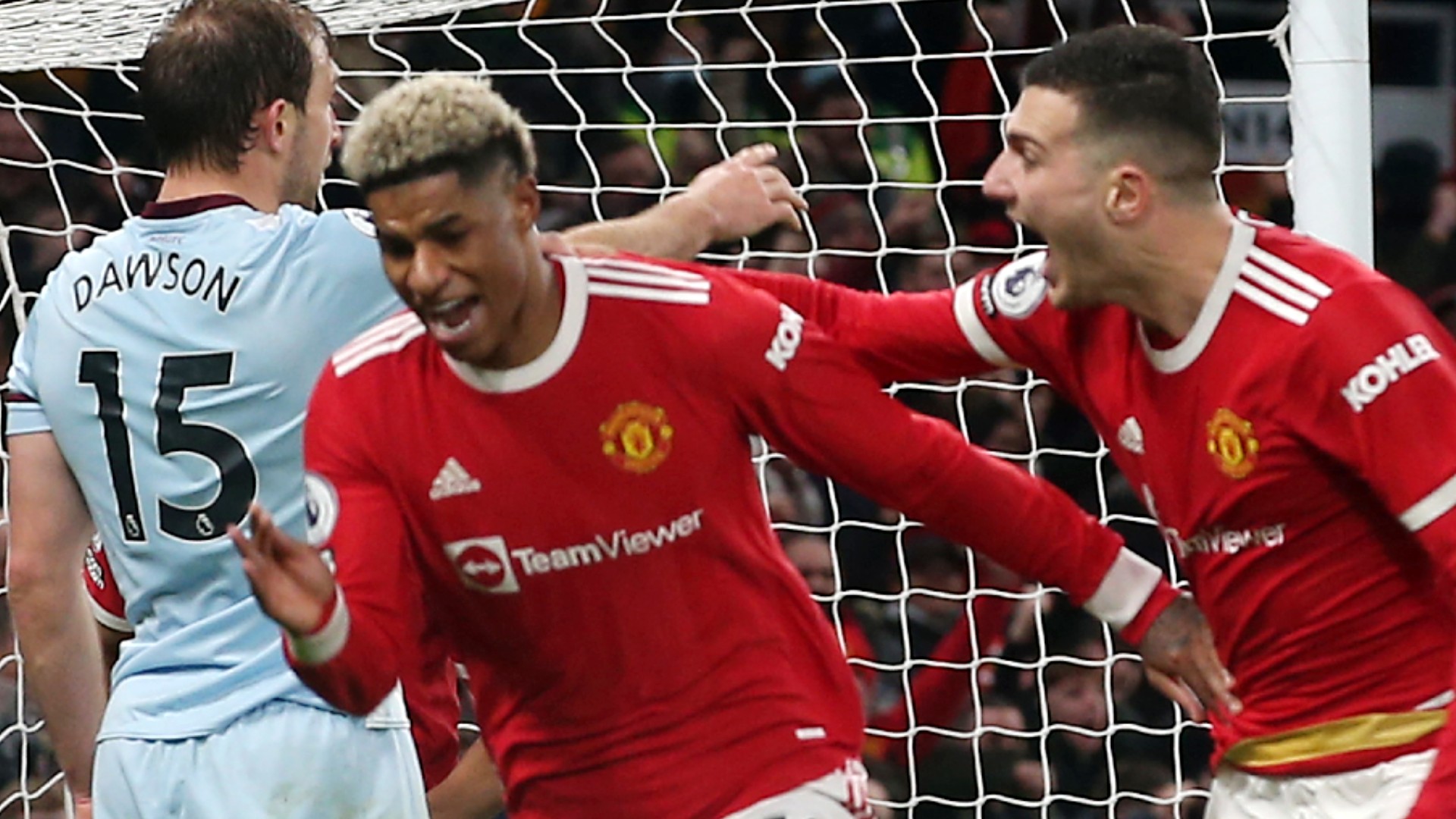 Manchester United overtook West Ham for fourth place in the Premier League table after scoring a late stoppage-time goal to beat the Hammers at Old Trafford. Marcus Rashford got the dramatic winner with the final kick of the game.

Edinson Cavani delivered the cross that found his fellow second-half sub on the opposite end of the six-yard box. Replays seemed to indicate a hint of offside on Cavani’s position, but the Video Assistant Referee didn’t flag an error and the goal stood.

The match seemed destined for a 0-0 draw with very few opportunities, including no shots on target in the entire first half. Both defenses clamped down with the stakes being high and the coveted fourth-place position on the line (at season’s end, the fourth-place finisher will earn an automatic berth into the lucrative UEFA Champions League).

Fred’s point-blank blast in the 50th minute was arguably the best look at goal in the game before the winner, but West Ham ‘keeper Alphonse Areola came up with the big stop on that opportunity.

A Tomas Soucek glancing header on an 88th-minute corner nearly helped West Ham earn the late clincher, but in the final seconds of stoppage time, a Man United breakaway led to the gamewinner which brought the house down:

The race for fourth place in the Premier League promises to see many developments over the weeks and months ahead. A win by Arsenal or Tottenham Hotspur on Sunday would bump Man United out of fourth place. Including up-and-coming Wolves, there are six teams that project to vie for two places in the UEFA Champions League.

Note: *Only the top four teams qualify for the 2022-23 UEFA Champions League.

93rd min.: Manchester United scores! Marcus Rashford gets what looks like the winner, but Edinson Cavani may have been offside. VAR allows it to stand. It is the winner.

90th min.: There will be three minutes of stoppage time. After conceding a corner kick, David De Gea neutralizes the ensuing set piece with a punch.

88th min.: Tomas Soucek gets a glancing header on a corner and the ball just needed a touch in the six-yard box, but no one was there to apply the finish. Dangerous opportunity for West Ham.

82nd min.: SUBS — Anthony Martial and Edinson Cavani come into the match. Mason Greenwood and Fred are off. Martial is met by boos from the Man United crowd. Remember, Ralf Rangnick said that the Frenchman, who is angling for a January move out, didn’t want to be on the team for a recent match.

78th min.: Man United’s forwards keep the ball alive up top and Bruno Fernandes fires a shot, but it’s way off target. Nothing genius about that attempt and Fernandes is visibly disappointed in himself.

73rd min.: After that wild spell, things have calmed down again. This game is screaming for a stroke of genius from one of the star players on either side.

63rd min.: CAUTION — Declan Rice goes into the book for pulling back Rashford. He didn’t like the card from referee Jon Moss, but it was the right decision.

62nd min.: SUB — That’s it for Anthony Elanga. Marcus Rashford comes on for him.

61st min.: This match has officially taken flight. It’s Elanga with the latest attempt on a first-time shot inside the West Ham box. The crowd’s energy is rising, feeding off the action on the field.

57th min.: CAUTION — First yellow card of the match to Harry Maguire. He nicks the ankle of Jarrod Bowen on a sliding challenge. Fair yellow card.

54th min.: Jarrod Bowen hits the side netting! A corner bounces out to Bowen and he takes it with his right foot. Already more action in the first 10 minutes here than in the first 45 minutes.

50th min.: The balls fall to Fred who has a clear shot on goal just inside the box, and West Ham ‘keeper Areola stops it for a corner. Nothing comes of it. But finally we saw a first shot on target.

Halftime: Outside of a half-hearted penalty shout, there was not a single highlight in that first half. That’s an indicator of just how high these stakes are for both clubs. We’ll see if Manchester United takes more risks and throws on Edinson Cavani and Marcus Rashford in search of the breakthrough. It feels like one goal will decide this.

42nd min.: West Ham has numbers back to clog its own penalty area and Man United can’t find a way through. The Red Devils will need to move a tad faster to find an opening. Meanwhile, West Ham could use an extended spell of possession for some relief from all the deep defending.

36th min.: Man United penalty shout! Cristiano Ronaldo goes down in the box on contact from Kurt Zouma, but he was looking for that one. The referee, Jon Moss, does not point to the spot and Ronaldo doesn’t like it.

31st min.: So there’s not much is happening around either box, a sign of just how even this match truly is, and how sloppy the teams are in possession. Not much separating West Ham and Man United thus far.

20th min.: Bruno Fernandes nearly connects with Cristiano Ronaldo in the box! An in-swinging ball just misses the head of a diving Ronaldo who beat the West Ham offside trap. It feels like a goal is coming for Man United.

17th min.: Man United has pinned West Ham deep in its own end during these first 15 minutes with much of the action coming on the left side, down Anthony Elanga’s flank. The latter’s addition to the lineup over recent matches by Ralf Rangnick has made for a positive impact.

7th min.: Not to be outdone by Zouma, Man United captain Harry Maguire comes up with a block on Jarrod Bowen in the Man United box. It’s been an even start to this game and it should be an even game.

4th min.: Kurt Zouma already with a big block in his return to the West Ham starting lineup, stuffing Man United’s Mason Greenwood on a shot attempt at the top of the box.

Moyes on Fabianski: “Like every other club, we’ve got some injuries & we’ve got some COVID [cases], so we’ll have to play with what we have. It’s unfortunate that Łukasz misses out – he’s been playing so well for us this year” https://t.co/UYcM1O1BqX

9:14 a.m.: There were some doubts about a neck injury keeping Ronaldo out of the squad. He’s starting:

8:40 a.m.: Declan Rice, rumored to be a candidate for a transfer move to Man United in the future, should be a major factor in this match.

Despite carrying some knocks, veterans  Cristiano Ronaldo  and Edinson Cavani  are in the squad, with Ronaldo starting. Jadon Sancho  is a bereavement absence after a death in his family caused him to sit out the midweek match against Brentford.

The players absent for this one are the injured Paul Pogba and Luke Shaw (hamstring), and defender  Eric Bailly who’s at the Africa Cup of Nations with Ivory Coast. Aaron Wan-Bissaka is out due to illness, while defender  Victor Lindelof  misses the match to be with his family after their home was broken into this past week.

The questions for manager David Moyes revolved around the fitness of  Tomas Soucek (recent bout with COVID-19) and center back Kurt Zouma  (lengthy absence for a hamstring injury), but both are back in the starting lineup. Although  Said Benrahma  was available after Algeria’s group-stage elimination at the Africa Cup of Nations, he’s not in the squad.

Starting goalkeeper Lukasz Fabianski is not in the squad, but it’s not clear whether it’s injury-related or a COVID-19 case with Moyes not specifying.

How to watch Manchester United vs. West Ham

MORE: Updated Premier League table and all the races